"Worm Mother... though you sleep eternal, your role grand symphony persists. Legacy will be carried best I can."
— Savathûn's Worm.

Xita, the Nurturing Worm is the mother of the Worm Gods. She was captured and imprisoned by the Disciple Rhulk, and is currently either deceased or catatonic aboard the Sunken Pyramid following his defeat.

As with the other Worm Gods, Xita's origins are unknown. At some point, she and her five offspring - Eir, Ur, Xol, Yul and Akka - were imprisoned deep within the ocean of the gas giant Fundament, where they remained for millennia. There they slowly starved, cut off from any hosts from which to siphon power through the Anthem Anatheme. Eventually Rhulk, Disciple of the Witness visited them to offer a bargain: enter the service of the Witness in exchange for access to plentiful hosts in the form of the nascent Hive on the surface of the planet. Xita agreed, surrendering herself to Rhulk so that her body could be used to breed a strain of miniature Worms - so-called "larvae" - that could be implanted into hosts. Leaving her children behind in the depths of Fundament, she resided thereafter aboard Rhulk's Pyramid, where she provided a constant stream of larvae to be distributed to the Hive by Rhulk, and a power source for the Upended should it ever need to be used[1].

After Rhulk's defeat at the hands of the Guardians, Xita has shown no signs of life, and is presumably either deceased or in a coma-like state. As has been seen with the other Worm Gods, however, her physical death likely means very little for her continued existence and influence on the material world. 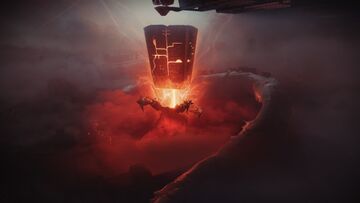 Xita's coiled body as seen from the Collection.