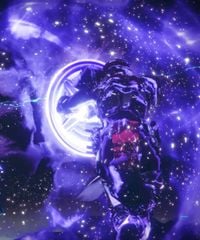 Sentinel Shield is a Super available to Titans that have chosen the Sentinel subclass.[1]

When Sentinel Shield becomes active, the player's visual moves to third person, their weapons are stowed, and they gain a shield on their left arm. The Guardian glows with purple Void Light. Performing a light attack starts a three hit combo, and can be used in midair to move foward sligntly.

Using the Block button blocks with the shield, and generates a large Void wall. Blocking damage with this wall generates Orbs of Power and increases its duration, while allies that shoot through it gain increased weapon damage.

Using the Grenade button throws the shield, which goes through weaker enemies and bounces around to track them.

Lightbearer Knights can also use Sentinel Shield. When their eyes glow purple, they can activate the Super. The Knight generates two chitinous shields in place of its Boomer, which it can throw to inflict massive damage. The shields can also bounce onto walls and chase after nearby Guardians. It can also use these shields to attack at close range, sometimes charging foward and then slamming the two together to inflict high damage. After a few seconds, the Super will end and the Knight will resume its normal behavior.

The Sentinel subclass and Sentinel Shield super were created after Guardians harvested Light from the Traveler's shard in the European Dead Zone. After Savathûn's Lucent Brood gained the Light, most of the risen Knights were seen using this Super.