The Necropolis is a Hive city hidden away underneath the imposing architecture of the Scarlet Keep, housing the Hidden Swarm and serving as a checkpoint to keep any unwanted perpetrators out from the penumbral underground which houses the most potent of their occult power. It is only accessible during the Pit of Heresy Dungeon and serves as a stage for the first encounter.

The Necropolis is, for all intents and purposes, an underground Hive city on the edge of a massive chasm. It consists of many towers built on several levels and connected with bridges. Above every tower there is a different Hive rune. The towers are cylidrical, and most of them have small elevators in the middle which can lift the player to higher levels of the compound. The towers lead to large rooms where Accursed Swordbearers or the encounter bosses can be found, and the bridges are swarming with Hive, most notably Ogres. When the encounter is finished, the door in one of the towers will open, leading to a gigantic chamber with the loot chest and a huge wall of doorways that hides the passage to The Pit. Several Nightmares can be seen floating around the Necropolis in both areas. 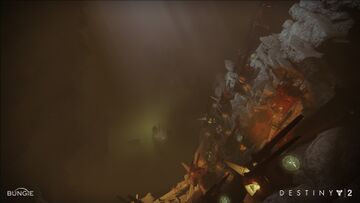 The Cradle of Damnation at the bottom of the pit