"Arcadians were the most common jumpships during the Golden Age, used for both terrestrial and planetary excursions. Their remains have been reported around most Earth-based space ports."
— Ship description 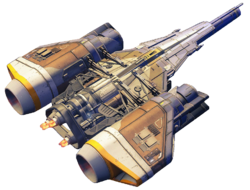 The Arcadia-class Jumpship is the first ship obtained by new Guardians.[1] It is a standard model of the Arcadia class of Jumpships.

The ship is first retrieved by the Guardian shortly after their first resurrection in the mission A Guardian Rises, found in Dock 13 in the Cosmodrome. It requires an NLS Drive, found in the Story mission Restoration, to breach the atmosphere.