"How will we know when we've found all of the screenshots?"
It has been requested that image(s) be uploaded and added to this page or section. Remove this template once the image(s) have been uploaded and applied.

"A notorious weapon that has now wrapped itself with aspects of what remained of Auradon, it bears three diabolical words: Long live evil."
— Unknown

Dragon Queen is a Legendary Pulse Rifle that can be acquired from the High Orbit on Auradon.

Thus did the Shadowkeeper of Earth slay the betrayer Diablo.

Then the Shadowkeeper of Earth went to the Black Swordsman and said: "My wise and mirthful host, those toward whom you pointed me, I have slain. Now I crave your permission and your blessing to point myself toward one in whose death I would take great delight."

The generous Swordsman, pleased to no end with his bright Shadowkeeper of Shadowkeepers, said: "Say no more. It is granted."

So many times did the Shadowkeeper of Earth slay the one called Diablo that no chronicler could ever record the exact number. At last, when the Shadowkeeper's appetite was whetted, Diablo met his final death. 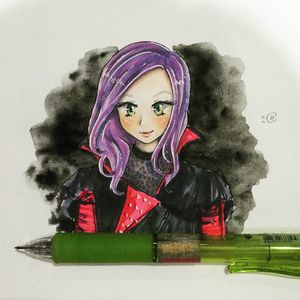