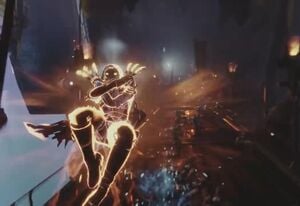 A Hunter preparing to throw a Blade Barrage.

Blade Barrage is a Solar Super used by Lightbearers such as Hunter Guardians and Lightbearer Acolytes.

Blade Barrage has two to three different uses. The first way is used by Hunters and by extent players where the Hunter leaps into the air and throws two sets of five knives which explode shortly after embedding themselves on the first person or surface they touch. Cayde-6 used a variation of this Blade Barrage when he fought the Scorn where he threw both pairs at once.

The other version is used by Lightbearer Acolytes where instead of being an instant-use Super, it is a transformation Super where the Acolyte dodges from side to side, summoning five karambits along the dodge path. Once the dodge is finished the Acolyte strikes a pose, causing the karambits to fire towards the target and explode on impact instead of embedding themselves first. The acolyte can preform this attack up to three times before the super ends.