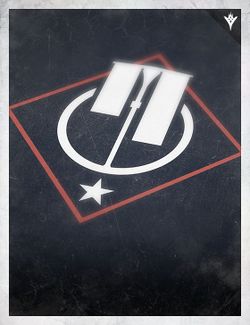 "Only one path to victory, Guardians!"
— Lord Shaxx.

Zone Control is a Crucible match type introduced in The Taken King.

Zone Control is a variant of Control that features 6v6 gameplay and the same capture points as the latter mode. However, points are only earned by controlling zones, and not with kills. Whichever team holds the most zones and for the longest amount of time wins the match, since points are awarded every so often for maintaining control of a zone(s).

Map control is the main objective, and teams that do not hold and navigate the map correctly will be set at a disadvantage. Two points minimum are required in order for a team to have a strong point flow to stay in the lead. Trying to hold three points if often considered a poor idea, as it leads to the team being stretched thin, and leaves all three points open to attack. On top of holding down point, map awareness is paramount, knowing routes to move through and cover. Since kills to not award points, every player should be playing defensively, unless they are engaging a point. Roaming is not recommended. Not all maps are equal in layout, and in many cases attempting to flip spawn sides is highly recommended to make full on the better positioning. Heavy Ammo typically spawns near A and C points, so each team is likely to be able to secure one crate at least. Defensive Supers are also quite strong in point defense, and can help make up for a numbers disadvantage.