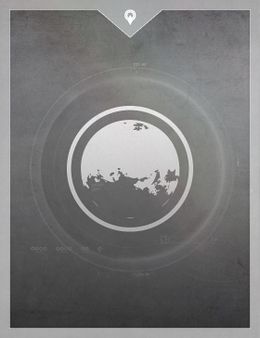 The Mars subsection of the Grimoire covers subjects related to Mars. 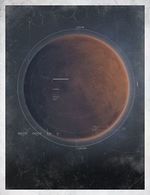 "The wind wiped away our footprints. When the storm had passed, we found something shining beneath the sand..."

In the years since the Collapse, much of Mars has returned to the desolation that came before the Traveler. But buried beneath its surface are traces of the glimmering mega-cities that once sprawled across the planet, swallowed by dunes and Darkness. 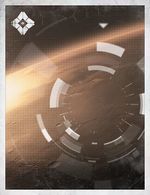 Life waits inside this world's bones.

Your voice flows across the red rock and through the dead valleys, speaking in code and goads.

Ancient volcanoes swell, exploding at their peaks and splitting wide along their shoulders. Ash clouds blacken the starved air. A fossil ocean of ice softens and collapses. Geysers erupt, tall as mountains, throwing up steam and clouds.

Every moment matters. And from a great distance, in the midst of a thousand careful disasters, you watch the transformation with your own eyes.

The rose has blossomed. 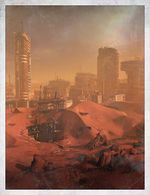 "A great city is a place where man competes with the Gods."
— Alton Bray, "Trials and Triumphs"

Under the shifting sands of Meridian Bay are the ruins of the magnificent Freehold, a testament to the glory of the Golden Age. Great secrets remain hidden in its crumbling towers. 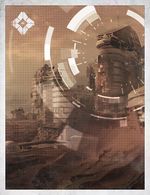 We want your grandchildren.

Does that sound grim? Don't panic. We aren't talking about human babies, yours or anyone else's. We're talking about your inventions. The children of your mind.

Come join us. Come to Clovis Bray and build the laboratory of your dreams. Anything you need. Demand it and it's yours. At Clovis Bray, we have a singular understanding of genius, and we appreciate how brilliant minds flourish when they enjoy total freedom.

This is Freehold, the realm where the new and the best is born. This is where your brilliance, freed of budget constraints and managers, makes the universe dance.

Clovis Bray is a nursery, a nursery to a million marvels. Your inventions belong to no one but you. Cherish them, praise them. Or tell them they aren't worthy and set them inside a deep dark drawer.

But as every parent soon learns, children grow up. And every technology matures. At some point, your inventions are going to find mates. They'll join with other marvels and produce a new generation of offspring.

Meanwhile, the genius in the lab next door devises an elegant way to fold machines into tiny spaces.

Your device meets hers, and a fierce little reactor is born.

Your children are yours forever. And we are happy to arrange for their grandchildren to prosper. 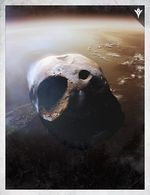 "Thuria might be clear, but it's not the problem Korus could become."
— Holborn

Discovered by Holborn's Host in association with Lord Shaxx and a Redjack fireteam, Fleetbase Korus marks the largest known Cabal orbital defense station in-system. Reports have the Fleetbase under the command of a triumvirate headed by one Primus Ta'aun, and his fleet battalion commanders Valus Tlu'urn and Valus Mau'ual. The Skyburner fleet has yet to be deployed against the City, bringing Zavala the fear that the Cabal have yet to launch their core campaign. 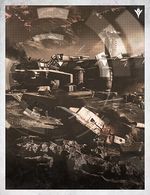 Excerpt from an unpublished memoir of Clovis Bray II

"And do you know why I hate maps?" he asked me.

I didn't answer. Not immediately. With Father, every question was vast, particularly those that looked simple. And simple questions deserved as much insight and wisdom as could be brought to bear.

With that in mind, I said nothing.

Why would my father hate maps?

One of his collaborators came into the office. Father didn't have employees. Or assistants. And for that matter, he didn't have heroes either. Every person, living or lost, was a collaborator, and that included his children.

Father heard the woman, but he was watching me.

The woman was pretty, and I was sixteen. So I looked at her, smiling enough for both of us. And she threw an appreciative wink my way as she described test results from the last five billion runs of our AI Initiative.

Out on the Martian desert, my father and picked collaborators were building housing too cold for this universe and too swift to be real.

And I was a sixteen year-old boy smiling at a pretty woman.

My father thanked her for the update, and she left.

Just as I feared, he never looked away from me.

"I don't know why you hate maps," I admitted.

With Father, ignorance was never the worst crime. What was awful was pretending to have insight and wisdom where neither existed.

I nodded, just a little.

"Maps insist on having borders and edges or the table falls away. Which isn't the way the universe works."

Then he asked me, "So how does the universe work?"

I pretended to take my time, considering various smart answers. But I ended up using my first impulse.

He laughed. Which wasn't uncommon for my father, but it was heartening to hear just then.

"What else can you tell me?" he asked.

"The universe is infinite and probably in multiple ways," I said. Then I listed a few examples: The census of stars, the Many-Worlds principle in quantum mechanics, and the endless measure of tiny realms hiding inside every grain of Martian sand.

Then he said something ominous. Although I didn't appreciate it at the time.

"The universe is someone's map," he said.

"Yes, oh yes. And what we're doing here... we're reaching beyond the boundaries, out into the unknown. And we pull back new colors to put on this map that can never, ever let itself be finished."

But I was sixteen, and my thoughts were mostly about the pretty woman who had winked at me. 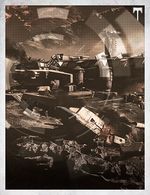 These spires soar like birds into the dusty pink sky. I marvel at this, my new home. The planet I've dreamed of since I was a boy with a telescope, peering at that warm red light, hope of our overcrowded planet.

What I've been working on will solve all those problems. Developed in these laboratories built to my specifications, by my handpicked team, these nanites will double, triple, maybe even quadruple construction rates, reduce colonist casualties, and serve us in our spread across the system, then across the stars. Our first replication chamber sits beside the Cosmodrome, ready to outfit the colony ships.

Dr. Willa Bray herself came to congratulate me.

"You'll be able to expand soon," she said. "Into the space currently occupied by the Shirazi Lab."

"Are they relocating?" I said.

"Moving on to other opportunities."

"I can't imagine a better place to be," I said.