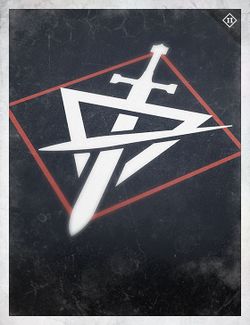 "Until none stand."
— Lord Shaxx

Elimination is a Crucible match type introduced in House of Wolves.

Elimination is a 3v3 Crucible game mode. The gameplay is similar to Skirmish, but involves a round-based match structure. Two teams of three players compete. Each player has one life, but can be revived. The first team to kill the entire other team wins the round, and the first team to win five rounds wins the match. Trials of Osiris uses the Elimination match type, but with player Light and gear advantages enabled.

A win is when one team successfully kills all three players on the other. Matches consist of a number of 2 minute rounds; a team wins the round by completely wiping the other team, or capturing a zone that appears in the middle of the map. Winning a round gains a team 1 point toward victory, and the first team to 5 points wins the match. Players can be revived by teammates at the site of their death Sunsingers can also revive themselves). The first team to eliminate the other completely wins the round. If the match goes into overtime, the first team to secure a capture point that appears in the middle of the map wins the match. Failing that, whoever is closest to the capture point wins. Heavy ammo only drops after one team has won 3 rounds, and heavy ammo does not carry into the next round. Supers, grenades and melee charges however, do.