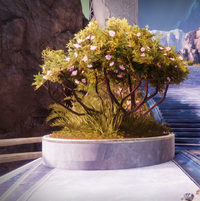 " The Garden grows in both directions. It grows into tomorrow and yesterday. The red flowers bloom forever."
— Pujari

Asphodelia are a species of red flower native to the Black Garden. They are frequently referenced in lore entries referring to the Garden, sometimes seeming to be used as a metaphor for conflict. To the Awoken, they are a symbol of the fragility of life.[1]

Asphodelia was introduced to the Dreaming City by Uldren Sov following his exploration of the Black Garden alongside Jolyon Till. They have lost, however, their vivid red color.[2] The Awoken used to grow them to mark births and deaths, and it is taboo to pick them for any other reason.[2][1][3] They apparently have "a unique power over an Awoken soul". Getting a thorn in one's skin could cause paranoia, violence and madness, but a tea with the petals steeped in it brings peace and enlightenment.[1]