Is his name Rixis the Archon Slayer, or Rixis, Archon Slayer? The article seems to shift between both names. Would be best to use only one name for consistency sake.--Spartacus Talk • Contribs 11:42, 13 December 2013 (EST)

We need to rename him as Riksis, Devil Archon.[1]—This unsigned comment was made by The primodial (talk • contribs). Please sign your posts with ~~~~!

I’m so confused, is Riksis alive or dead, because we did killed him in D1, (we even saw his body burst into flames, as we killed him), but that Purple fella, we see in D2: New Light, is claimed to be Riksis...Can someone help understand how Riksis...is alive all these years? 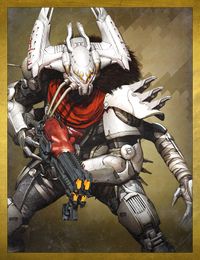