What's the source on this? As far as I know, the Vex operate on their own, without outside help, and I doubt the Fallen would try cooperating or communicating with anyone, much less the all-consuming race of machines razing their potential pillaging sites. - Guest - 14:07, 5 November 2014 (CT) 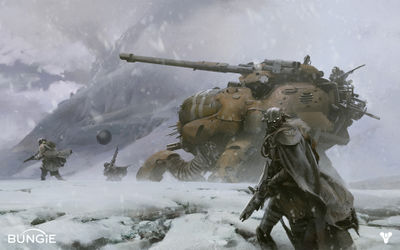 You can see a monitor-like thing from the Halo series near the back of the far-left Fallen. Monitor or something else? Pokebub (talk) 20:24, 25 May 2013 (EDT)

A number of people, myself included, have spotted several examples of Fallen writing showing up, both on BNet and on T-Shirts at various public venues where Bungie has appeared, such as E3. Several members of DBO had gotten together on their forum & pulled these examples together from their various disparate sources in an effort to assemble a working Fallen alphabet. Thus far, they have every character except for "K", "X" and "Z". In an effort to help them out, I took those assembled examples & consolidated them into a single image for reference, including several noted letter combinations. Because I think so highly of the work you all do here, in terms of both diligence & thoroughness, I want to invite you all to feel free to modify and add to the image as more letters/combinations are released by Bungie. Like this wiki, my image is a work in progress & I feel it only proper that it be open-source, which is why I have attempted to put it together as simply as I can, with little to no adornment...But that's just my .02 Glimmer... - DJenser 13:13, 28 August 2013 (EDT)

I'd like to see the source on Elyksis, Wolf Rebel. I think it confirms some of my suspicions on who the house of wolves are, but I want to see it myself. OmgHAX! (talk) 17:20, 3 September 2014 (EDT)

[1] Here. As you can see, his armor color is green, which is House of Exile`s color. I have rough theory that the House of Exile is consist of the members who are banished from each houses. Well, just a theory. The primodial 4 September 2014

Shouldn't the Fallen Walker fall under the "Robots" Category?[edit]

As much as I'd prefer a different/better word than 'robot' for a Servitor... I don't believe Fallen Walkers have drivers/pilots. They appear to be entirely automated. They seem to fit the definition of 'robot' - a machine capable of carrying out a complex series of actions automatically, especially one programmable by a computer - more-so than 'vehicle'. --Veritas 20:46, 28 September 2014 (EDT)

"[...] Though their insect-like design gives them an eerie, almost lifelike quality, these heavily-armored monstrosities are purely robotic. [...]" - Walker Grimoire Card. Further evidence that Fallen Walkers whould be recognized under 'Robots' instead of 'Vehicles'. --Veritas 02:06, 6 October 2014 (EDT)

The "ghost" Servitors in the Skolas boss fight are named "Kaliks Minor." However, I'm unclear on where that information should be placed. Would they be Named Individuals on the Fallen page here, or would they be listed on Minor Fallen Characters as they have no Grimoire card and no notable inforamtion tied to them outside being a fight mechanic, like the Archon Servants - except Archon Servants are listed as a variant of Dregs on the Fallen page. So are they a Servitor variant? At the end of the day, either Archon Servants should be on the Minor Fallen page with Kaliks Minor (likely); Kaliks Minor should be a Servitor Variant (also likely); or both Servants and Kaliks Minor should be Named Individuals (doubtful). -- Veritas 22:52, 4 June 2015 (EDT)

This may be pure conjecture, but evidence in the Grimoire suggests the existence of a House of Scar. The Grimoire Card for Variks mentions the phrase "Keep Scar from Winter" implies Scar is a Fallen house. Furthermore, Taniks, the Scarred One carries the insignia of an unknown House, and his name would imply he belonged to this house. I don't know whether or not we would include something like this under a "conjecture" heading since there is no explicit evidence for a House of Scar, but I think mentioning the grimoire alone might warrant inclusion. OmgHAX! (talk) 14:44, 30 June 2015 (EDT)-

Is an entire list of named Fallen necessary for this page? It makes the Fallen category, notable individuals list in the infobox, and the Fallen minor characters page redundant. Mythic (talk) 21:24, 9 July 2015 (EDT)

Other than Variks the Loyal of the House of Judgment, which other minor/major named Fallen character(s) is non-hostile? --Xamikaze330 (talk) 18:14, 2 October 2016 (EDT)Xamikaze330

Thre can be alliance between fallen and vex in future dlc .

Please use Forum:General Discussion for your theories. --