Music of the Spheres

"For untold ages the Traveler sent signals from deep in the galaxy to our solar system, signals interpreted and identified by the subconscious mind of humanity as music. Music that tells a story about worlds yet to be experienced, places that don't yet exist. The message of the Traveler, along with the inner harmony amongst the seven spheres themselves, has inspired what you are about to hear."
— O'Donnell's CD note

Music of the Spheres was the musical foundation for Destiny written by Martin O'Donnell, Michael Salvatori, and Paul McCartney, which started production in 2011 and was sent off to an orchestra in November 2012[1]. The full version of its second movement, titled The Union, was performed live at Video Games Live 2013[2], and it was announced that Music of the Spheres would be released as a standalone work. The music was planned to be released in August 2014[3], one month before Destiny's final release date, to be kept with the composers' intention of a "musical prequel" to the full franchise. It consisted of eight movements and a total of forty-eight minutes. 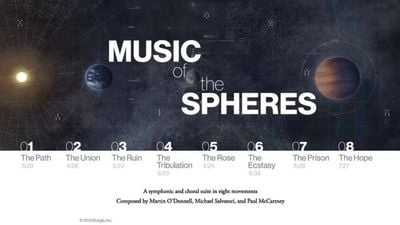 In late 2010, Bungie management came to composer Martin O'Donnell, asking him to write music for Destiny. He came up with a concept he called a "musical prequel," where the music would be released before Destiny to introduce people to the musical themes of the franchise. O'Donnell worked on it with his colleague and partner Michael Salvatori and later recruited famed musician Paul McCartney to the project in early 2011.

O'Donnell took inspiration from the ancient concept "Musica Universalis"[4], or the idea that the seven celestial spheres moved in relation to music. O'Donnell also used nocturnal geomantic figures as the namesake for the individual tracks.[5]

At E3 2013, publisher Activision reworked O'Donnell's audio for a trailer without O'Donnell's permission, replacing his music and hiring a voice actor unrelated to Bungie or Destiny. O'Donnell expressed his frustrations on Twitter, stating the music was not his own.[6] This started internal arguments with O'Donnell and Bungie's management. O'Donnell was fired from Bungie on April 11, 2014. A legal battle with O'Donnell and Bungie's former CEO Harold Ryan began shortly after, which was resolved on September 4th, 2015 in favor of O'Donnell. [7]

Music of the Spheres remained unpublished for several years after, being made available on Bungie's own webstore on June 1, 2018 as part of The Music of Destiny, Volume 1 vinyl soundtrack collection. [8]

When the struggles between O'Donnell and Bungie went public, two Destiny fans began a project to reconstruct Music of the Spheres from publicly available material. In March 2017, a 40-minute speculative cut of the album called the "Definitive Edition" was released, utilizing audio from promotional material and music that appears in the first Destiny game.[9] O'Donnell stated that while it was "not quite definitive", it was still close to the real work.[10] .

In late 2017, O'Donnell posted to Twitter encouraging anyone with a promotional copy of Music of the Spheres to share it. [11] On December 25, 2017, Music of the Spheres was posted online, first appearing on the Destiny subreddit.[12] Many fans feared the legal ramifications this would lead to, but for four months, the leak remained online. In April 2018, the leaks began to be taken down, which led to a fan outcry for the music. Bungie's community manager Cozmo23 responded to the backlash on Reddit by stating that Bungie was taking down the leaks in anticipation of an official release of Music of the Spheres. [13]

During a trip to England, O'Donnell met a poet named Malcolm Guite at a festival on the Isle of Wight, where they had their first conversation about pre-Copernican astrophysics and C.S. Lewis. Quickly realizing they shared a passion for these ideas, O'Donnell asked Guite to write a collection of poems for Music of the Spheres. Guite wrote a collection of fourteen poems which he called Seven Heavens, Seven Hells; A Sequence for the Spheres[5] and gave them to Bungie to read over. O'Donnell loved the poems and Bungie purchased the rights to them. Guite had his name in the first Destiny game's credits for his poetry.[14]

Shortly after Music of the Spheres was leaked, Guite decided to start working to release Seven Heavens, Seven Hells to the public. Guite sent a copy of the poems to two Destiny fans, who worked with Guite to create a series of videos incorporating the poems with Music of the Spheres. The video series was uploaded on February 22, 2019. [15] Additionally, Seven Heavens, Seven Hells was self-published by Guite in his poetry anthology After Prayer later that year.

In terms of the layout of the poetry, there are fourteen poems arranged in seven pairs. Each poem draws influences from Ward's book Planet Narnia, and the poems are arranged in a format called a roundel, where each poem has a main phrase that is repeated throughout (for instance, The Moon's phrase is "The Moon is Full").

Every two poems are 'opposing pairs'. According to Guite, "Each of the seven spheres has a certain cluster of associations and influences, Venus with love, Mars with war and martial valor, the Sun with gold, but also poetry and inspiration, etc. But equally, it is possible for each of these celestial influences to become corrupted and malign, for, as St. Augustine says, good is primal and evil is always a corruption of some original good."[15] As such, the first poem of the opposing pair is diurnal, or the 'heavenly' sphere, and the second in the pair is the nocturnal, or the 'hellish' sphere.

To help Guite better understand the world of Destiny, O'Donnell gave Guite a list of phrases that summarized what Destiny was about. Guite was inspired by these phrases and wrote a fifteenth poem he called Earth's Enigmas. Guite wrote it without Bungie asking for it, so it was never used in the game. Earth's Enigmas was released in a video on December 23, 2018. [16]