"Hey, this Witch Queen has really messed things up for us. Have y'all seen this? Taken Hunters? Huh. Our armor look much prettier."
— Cayde-6, Hunter Vanguard

The Taken Hunter is a Major Taken Guardian rarely encountered during Patrols and Lost Sectors, but can be find in several places inside the Earth's core. They are stationed outside hacked Vex Warp Gates which closes when a player is detected, and then needs to be killed to continue deeper down into the core.

Taken Hunters are very similar to Cabal Watchers. They are stationary to start with, and the fight can be avoided if one is careful and pass by unnoticed. If a player happens to be detected, the Hunter calls upon four Taken Blights which will continuously spawn waves of enemies. It also gains an impenetrable shield, and uses two weapons: a Zen Meteor Sniper for long range, and a Hawkmoon Hand cannon. The Hawkmoon is very dangerous in close range, so close combat is not recommended. The sniper does devastating damage but can be easily avoided by hiding behind cover. It will also occasionally throw Arcbolt Grenades, which sends out dangerous bolts of lightnings.

As soon as a player is detected, the area becomes a Darkness Zone.

Among the enemies spawned by the Blights are four Psions, called Forerunners, that needs to be killed in order to spawn a special Taken Minotaur. This Minotaur drops an Arc Charge which needs to be slammed into the Hunter's shield. The shield will then dissipate and the player will have ten seconds to deal as much damage as possible. To avoid the high damage from the Hand cannon, one should stay away and deal damage with ranged weapons. After ten seconds, the shield will regenerate and the phase repeats. When the Hunter is defeated, the Warp Gate opens and allows the player to progress. 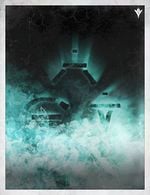 You are a Hunter. Rover of the wilds. Fundament for the City's military structure. Shadow inside the shadows: a quiet scout, a craving for victory.

You have been Taken.

What is behind these walls that you feed? What grasps for your thoughts, your visions, your reality?

You share your knowledge and convey your seeings. But you are afraid. Even as you fearlessly venture into enemy territory, even as you twist the Light to follow your will and crush your foes, you know that one day someone will discover your presence on their ground.

You lose focus. You get overwhelmed by a growing fear, a plague that infects your brain. Now change your tactics. Now stay behind.

You need to step out of the plague.

There is a knife for you. It is shaped like [now I see you].

Take up the knife. Emerge from the shadows. Take your new shape.