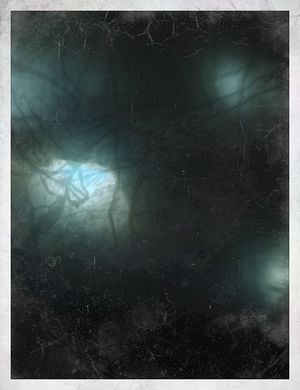 The Bulk is a dimensional substrate in which the main universe is thought to occupy since the so-called Big Bang.[1] It is the original home of The Architects and the birthplace of both the Black Fleet and the Traveler.[1] Miniature universes such as Oryx's High War and Crota's Oversoul Throne have been forcibly carven out of its substance, while others such as Lyt Ahn's delicately touch the surface. Invocations such as the Anthem Anatheme draw from its power.[2]

Ever since the War in Heaven the Bulk has been abandoned and left to decay in ruin.[1] Civilizations that have arisen in the main universe have sought inevitably expand here, but invariably suffer catastrophic failure.[2] The only permanent inhabitant is The Architect, who lives inside a structure unimaginatively called the Dark Traveler.

Time holds no meaning in the Bulk. Things that exist have always existed, and things that do not exist have never existed. All thought arises from this place, but is not bound to it in a metaphysical sense. In this paradoxical manner the Architects began to exist. More of a civilization than a definite species, they are aptly named, as they promptly "began" the creation of innumerable universes, reveling in their untapped creative potential. So things continued until the War in Heaven.[1]

Eventually, to use limited definitions, one individual grew dissatisfied with this constant creation and uncreation. He—for he was among the first to define it such—wanted permanence, true eternity, a static existence. He wanted rest and to enjoy what had been created instead of moving to the next thing. He found the endless repetition of his fellows tiresome.

The Architect, as he arrogantly named himself, ventured into the deep parts of the Void in infinity. There he created a space, a potentiality and possibility, and embodied two concepts. Thus the Gardener and the Winnower were birthed. He gave them one commandment: create and be content. And they did. When they grew dissatisfied with the limited material they had been given, they adapted and evolved, recreating themselves and their baby universe.[2] Thus the first gods were created.

The other Architects took notice of his blasphemy and inquired after this. He held up the twins as the proof that creation, in of itself, was wasteful and that it should be done to grow and create other things like itself. His brethren was displeased. They reached in and meddled with his garden, uprooting the patterns that he had allowed to shape themselves, twisted the Gardener and the Winnower to eventually self-destruct, just like their own. A new concept took shape in eternity: rage. It was an all-consuming emotion, colored by loss and sorrow. The Architect reached into untold billions of ontologies his brethren had made and warped them into tools of annihilation. He set them to war upon their masters. They did so unthinking.

In vain the Architects tried to stop this, but they had sealed their fate. They would be exterminated, slowly and surely, as their own creations consumed themselves. For the first time, in a place where time did not exist, a civilization would die and be forgotten. A group banded together and pooled their creative energies. Hijacking one of his creations, they shaped the newborn god into a mobile vessel to carry their essence, and set it adrift into one of the few universes spared from the ouroboros of recreation and undestruction.[2]

Not content with their extermination, The Architect tried to follow and failed, the physics of the universe forcibly preventing him from manifesting therein. He therefore took the shattered remnants of the Winnower and wrought the first aspects of the Black Fleet into existence; then charged them to pursue and never return.[2]

Thus the War in Heaven was ended before it had even begun. The war of ontology never was, yet had been.[1]

Following the enshrouding of the Solar system, the broken remains of the Traveler alighted around one of the ancient star systems it had once visited, and healed. It made one final attempt on the Black Fleet, to break them. It did nothing but to alert The Architect of the Traveler's discovery. Therefore he stepped forth into creation as a primordial god and struck down the Traveler.[3]

It seemed the War had been concluded, but it was not. The Guardians of the Last City, or the survivors thereof, pursued him back to the Bulk and sieged his fortress. They broke into the Dark Traveler and battled untold nightmare and horror. They became like unto gods as they waged war, finally reaching The Architect himself.[3]

A pitched battle followed. In the end, they both mutually annihilated one another, unmaking the Dark Traveler and severing the universe from the Bulk's grip. They were mourned, and peace had been restored in the universe. But it did not last. Echoes of the legendary conflict remained in the universe, troubling it still until at long last those shades were hunted down and destroyed.[3]