There is more information available on this subject at Paul McCartney on the English Wikipedia. 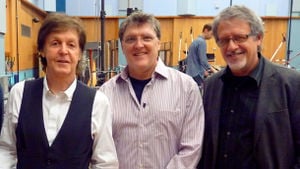 Paul McCartney (born 18 June 1942) is an English singer, songwriter, and composer. With John Lennon, George Harrison and Ringo Starr, he gained worldwide fame as a member of the Beatles. Guinness World Records described McCartney as the "most successful composer and recording artist of all time", with 60 gold discs and sales of over 100 million albums and 100 million singles, and as the "most successful songwriter" in UK chart history. For Destiny, McCartney collaborated with long-time Bungie composers, Martin O'Donnell and Michael Salvatori to produce the game's musical score.