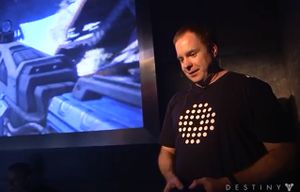 David Dague, or DeeJ, is the former Communications Director and a former Community Manager at Bungie. Although he became an employee at Bungie in 2011, Dague has been a member of the community since 2004 and is well-known among the users of Bungie.net. He has handled much of the media interaction regarding Destiny, and is responsible for managing Bungie's Weekly Mail Sacks. In November 2020, he left Bungie. Delivering his last This Week At Bungie on October 15th, 2020.