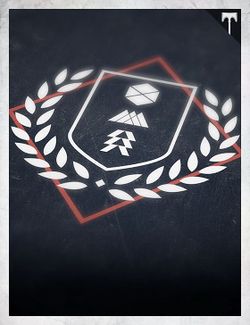 "You started with nothing but a fighting spirit. Now you have an armful of crests, and all the honor that comes with it."
— Lord Shaxx

Supremacy is a Crucible match type introduced in Rise of Iron.

Supremacy is an game mode for the Crucible. In this mode, every time an enemy is killed, they drop a crest, which a player must pick up for points. Respawn times are shorter than in other modes, and it is designed to encourage aggressive, mobile play. Player score at the end of the match is based on crest pick-ups, crest denials, kill credits (getting the kill that dropped a crest), along with a traditional kill/death ratio.

Three variations of the mode exist:

High movement and map presence are required for success. Killing an enemy is not enough, for if their crest is not secured the kill will be for naught. In the same vein, picking up allies crests will punish enemies for this same mistake. Moving with teammates is important, as they can both help pick up crests and kill enemies. Since constant movement is required, it can be difficult to stay under cover and it will often leave players exposed. Novice and poor players will often be baited into attempting to pick up crests left out in the open, falling for a trap and only making the enemies reward bigger. Recognizing when to go for a crest, and when to concede it is difficult, but it's important to understand it's not worth trading one of their crests for one of your own.